Berlin was all about elections and Berlin Art Week last week. By Sunday night all votes were counted and Berlin Art Week closed down its doors for another year. Being sunny, dry, and rather warm for an autumn weekend, the weather was great for cycling around town.

I must confess that until now in Berlin I was focusing on galleries rather than on museums. Berlinische Galerie, one of the newest museums in the city, participated in Berlin Art Week and so I went there for the first time. They had the huge-scaled and radiant works of Franz Ackermann on show; mixing photography and wall painting. But many came to see too the works of the photographer Tobias Zielony. One of his projects was about young prostitutes in Berlin in their different roles of everyday life and the other one about teenager in a US desert town, who he claims are all on crystal meth for ‘if you have absolutely nothing to do, you do bad things’.  Other than that, Berlinische Galerie has an impressive collection of art from 1870 to the present. (Check if you can recognise a face on the blue work of Dunja Evers)

One of my friends is involved in Momentum and in their collaboration with Collegium Hungaricum Berlin. They had an extensive video art project but I went to see the performance which was a fusion between ballet and visual arts. Momentum had a similar show some months ago and they seemed to have taken it further with this one. It was an amazing ballet performance with interactive laser projection.

It was more than a year ago when I went to see a show at Neue Nationalgalerie. Their participation in Berlin Art Week included stunning works by Thomas Scheibitz, Martin Eder, Anselm Reyle and Michael Kunze.

For the project ‘To Paint Is To Love Again’ Deutsche Bank Kunsthalle presents four woman painters of different generations. I thought that the painting by Katrin Plavcak ‘Freddie Mac & Fannie Mae having a ball’ was entertaining, especially after recent discussions on the transformation of the collector base from responsible into-art collectors towards collectors buying only well-established names at whatever high prices – apart from the political background in that case.

Berlin Art Week was however, not all about museums and private non-galleries. There was also the art fair abc contemporary with local and international galleries participating. Most of the works here were conceptual mixed media art. There were a number of things I really liked. The walk-in cube by Timo Klöppel was made of windows of old buildings of Berlin. The heavy woven rug by Pae White seemed to be lightweight as smoke. Inside of the ever rotating ball by Ulrich Vogl there were little ‘islands’ floating with the motion.

Same as at the gallery weekend, it was again worth to go to the opening at St. Agnes, a former church now used by Gallery Johann König.  The central work of the show was the mirror construction by Jeppe Hein, rotating slowly around the axis. The machine construction by Andreas Fischer, another show of the gallery (on display at abc art fair), refers to cultural and social norms being essential to mental stability and causing conflicts in individuals at the same time. It displays and speaks the words ‘speech disorder’,’thinking error’, ‘body function error’ and announces that the cloister is closed for visitors due to the preparation for the chapel service. He might want to point out that in these kind of emergencies there is mostly none or no immediate help available?

Preview Berlin was another art fair in the course of Berlin Art Week. However, to me it was rather difficult to find inspiring works here.

Whilst the art fairs and other programms of Berlin Art Week are over now, the current shows of the museums introduced above are on for some more weeks or even months in some cases. So check the websites if you happen to be in Berlin in the near future.

I am blogging about art, artistic people and about discovering my own paths to art
Photos by artxcurious 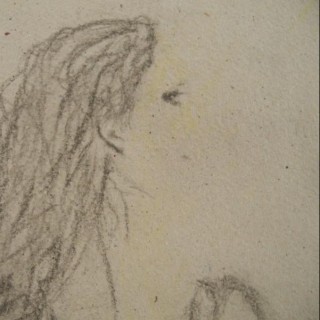